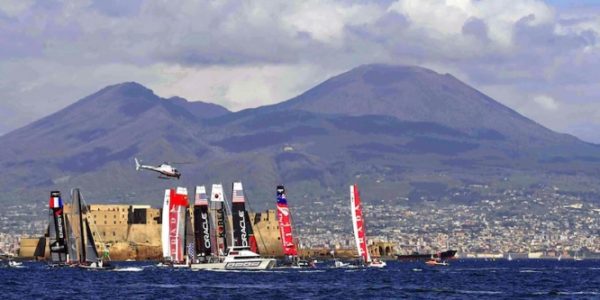 From 16th to 21st April  Naples will be the backdrop  to the spectacular America’s Cup World Series regattas, the first stage of the event in 2013. Once again, the city is preparing for the event, after hosting the AC World Series in April 2012, with over 500,000 spectators. The eleven participating teams, on board the very swift,latest generation, rigid-wing catamarans will compete on short, narrow race courses, a few metres off the coast of the Bay of Naples.

Sudcantieri will not miss this opportunity: for those who want to watch the most exciting sailing event in the world from the front row, book the whole week from the 16th – 21st April, and the 15th and 22nd April will be FREE! At the end of the Neapolitan stage, the America’s Cup World Series will continue in the United States where it will conclude at the end of May.  Subsequently, the America Cup teams will compete in the Louis Vuitton Cup (San Francisco, end of August) for the finals in September.

RESERVATION REQUEST
Select Language
We use cookies to make sure you can have the best experience on our site. If you continue to use this site we will assume that you are happy with it.OkPrivacy